Billy Loes, a leading pitcher for three pennant-winning Brooklyn Dodgers teams of the 1950s with an image as an eccentric that seemed a perfect fit for a franchise long known for its colorful characters, died July 15 at a hospice in Tucson. He was 80. 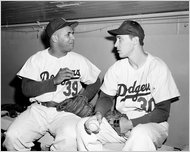 His death was confirmed by his wife, Irene, who said he had diabetes for many years.

When the Dodgers faced the Yankees in the 1952 World Series, Loes became a modern-day incarnation of the Dodgers’ Daffiness Boys of the 1920s, when they once had three men on third base at the same time.

On the eve of the 1952 Series, Loes was asked how the Dodgers would fare. He picked the Yankees to win in six games.

Then came Loes’s misadventures in Game 6, at Ebbets Field.

Pitching in the seventh inning with a 1-0 lead, Loes gave up a home run by Yogi Berra and a single by Gene Woodling. Then he balked by letting the baseball slip from his hand while he was on the pitching rubber, sending Woodling to second base. With two out, Vic Raschi, the Yankees’ starting pitcher, hit a ball off Loes’s leg, and it caromed into right field for a single, scoring Woodling. The Yankees went on to a 3-2 victory, tying the Series at three games apiece.

Afterward, Loes had an explanation for failing to snare Raschi’s comebacker: he said he had lost the ground ball in the sun.

The Yankees won the World Series the next day.

The aura of Loes the loopy Brooklyn Dodger gained national exposure with an August 1953 article by Jimmy Breslin in The Saturday Evening Post titled “The Dodgers’ New Daffiness Boy.” But the article pointed out that Loes was possessed of a basic shrewdness, having talked the Dodgers’ famously penurious general manager, Branch Rickey, into signing him to a $21,000 bonus in 1948 when he was just out of high school.

As for that World Series prediction, Loes was quoted in the article as saying the news media did not get it exactly right: “I never told that guy the Yanks would win it in six. I said they’d win it in seven.” (Which they did.)

As for losing the grounder in the sun, Loes’s explanation was backed up by his fellow Dodger pitcher Carl Erskine, who told Peter Golenbock in his 2000 oral history “Bums” that the sun peeked through from between the two decks behind home plate for a few minutes on October afternoons at Ebbets Field.

“When Loes said he lost it in the sun everybody laughed, and the fact is, if you ever pitched in Ebbets Field, you know that’s possible in October with a ball that’s hit with a little bounce on it,” Erskine said.

William Loes was born on Dec. 13, 1929, in Queens and became a star pitcher there for Bryant High School. He made his debut with the Dodgers in 1950, then rejoined them in 1952 after serving in the Army.

He was sold to the Baltimore Orioles during the 1956 season and pitched for the American League in the 1957 All-Star Game. He pitched for the San Francisco Giants in his last two major league seasons and retired after 11 seasons with an 80-63 record.

His wife, Irene, of Chapel Hill, N.C., from whom he was separated, is his only survivor.

Over the years, Loes’s reputation for making strange comments grew. He was said to have expressed little ambition to be a 20-game winner, figuring management would always expect him to reach that milestone.

Asked about his flaky aura in the sports pages, Loes told The New York Times in 1957, “When they asked me a question, I answered them honestly.

“But most of them turned it around because they knew it would make better copy that way. It got to the point where I told a few writers, ‘Go ahead, write what you want about me and say I said it. You’ve been doing it right along anyway.’ ”

Previous: 2010 Baltimore Orioles vs. 1962 NY Mets – through 100 Games
Next: Baseball Cards and the Trading Deadline