Home » The Bill Chuck Files » Food for thought from Ben Shpigel, NYTimes: “Touching All the Bases Outside the Ballpark”

Touching All the Bases Outside the Ballpark 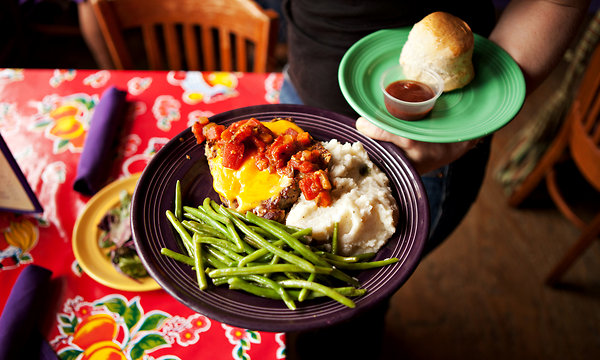 The author’s haunts have included the Flying Biscuit Cafe, in Atlanta, for its turkey meatloaf.

AFTER covering baseball for six years, after visiting every major-league outpost in the sport’s vast empire, I’ve learned a few things.

I know where to find marvelous Mexican food in Milwaukee, super sushi in Toronto and juicy bison burgers in Baltimore. This did not happen by accident. Unearthing a destination’s culinary charms became a challenge, if not a mission, and certainly a point of pride.

The rhythms of a baseball season, particularly its preponderance of night games, meant that many meals — more than I’d care to count — were scarfed down in a rush, at airports and in press boxes. Lunch, then, became something to savor, a time to decompress and relax, and for that hour or so I was determined to eat something tasty, and to take whatever time was needed to hunt down that one special source.

I know this doesn’t square with the popular image of the sports reporter: an Oscar Madison type who subsists on hot dogs and popcorn. And I wasn’t always a foodie, having grown up in a Philadelphia suburb where diversifying your palate meant taking out Chinese food instead of Italian. My wife still credits herself with introducing me to sushi and feta cheese.

But the extended road trips so common in baseball gave me a rare opportunity to visit new places and sample the local flavors. My exploration, at bottom, was born of a desire to immerse myself in my surroundings, to blend in as a local. That meant eating as if I belonged.

Now, as another opening day approaches and I’m no longer covering the Mets or the Yankees (having been reassigned last summer to reporting on the Jets), some of my fondest memories are as much about the meals as the games.

I scouted options far ahead, keeping a file of possibilities on my cellphone. The list was populated by favorites in cities where I once lived (Atlanta and Dallas), suggestions from friends and family, and places featured on Food Network programs like “The Best Thing I Ever Ate” and “Diners, Drive-ins and Dives.”

Ballplayers often provided a tip or two, though for dinner at least, they tended to head straight for the nearest steakhouse. They could afford it on their per diem of more than $90. I scoured Chowhound and Yelp. I perused menus online. I used Open Table to gauge a restaurant’s popularity.

But I made a rule of never asking a hotel concierge for a recommendation. The thrill, I believed, lay in the hunt. At least if I stumbled, it was my fault alone.

In some cities, a rental car was necessary, and not a bad idea, either. Driving a few miles for brisket tacos at Gloria’s in Dallas, or the crab and avocado omelet at the Beachcomber in Newport Beach, Calif., seemed a noble decision in retrospect.

The more I traveled, the more I associated cities with certain restaurants, and anticipated each reunion. Boston meant a date (or two) with the Benny — spicy Vietnamese grilled chicken with mint-coriander mayo and vegetables on a hard baguette — at Parish Cafe, a sandwich-lover’s utopia on Boylston Street that was recommended by a colleague.

Back in Philadelphia, I relied on Marathon — particularly its create-your-own Control Freak salads — to satisfy my hunger. And no trip to Atlanta, where I went to college, was complete without some turkey meatloaf and the namesake treat at the Flying Biscuit Cafe, so light and fluffy that it, well, flies off your plate.

When friends describe me as a walking Zagat guide (usually in Zagat style, as an “omnivore’s omnibus” with “encyclopedic” knowledge of places that “always hit the spot”), I demur because it’s not true. I know just enough restaurants to get by.

READ THE REST OF THE ARTICLE HERE

A version of this article appeared in print on April 4, 2012, on page D5 of the New York edition with the headline: Touching All the Bases Outside the Ballpark.